Galaxy Evolution In A Complex Environment: A Multi-Wavelength Study Of HCG 7 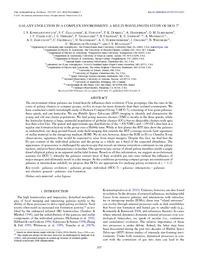 The environment where galaxies are found heavily influences their evolution. Close groupings, like the ones in the cores of galaxy clusters or compact groups, evolve in ways far more dramatic than their isolated counterparts. We have conducted a multi-wavelength study of Hickson Compact Group 7 (HCG 7), consisting of four giant galaxies: three spirals and one lenticular. We use Hubble Space Telescope (HST) imaging to identify and characterize the young and old star cluster populations. We find young massive clusters (YMCs) mostly in the three spirals, while the lenticular features a large, unimodal population of globular clusters (GCs) but no detectable clusters with ages less than a few Gyr. The spatial and approximate age distributions of the similar to 300 YMCs and similar to 150 GCs thus hint at a regular star formation history in the group over a Hubble time. While at first glance the HST data show the galaxies as undisturbed, our deep ground-based, wide-field imaging that extends the HST coverage reveals faint signatures of stellar material in the intragroup medium (IGM). We do not, however, detect the IGM in H I or Chandra X-ray observations, signatures that would be expected to arise from major mergers. Despite this fact, we find that the H I gas content of the individual galaxies and the group as a whole are a third of the expected abundance. The appearance of quiescence is challenged by spectroscopy that reveals an intense ionization continuum in one galaxy nucleus, and post-burst characteristics in another. Our spectroscopic survey of dwarf galaxy members yields a single dwarf elliptical galaxy in an apparent stellar tidal feature. Based on all this information, we suggest an evolutionary scenario for HCG 7, whereby the galaxies convert most of their available gas into stars without the influence of major mergers and ultimately result in a dry merger. As the conditions governing compact groups are reminiscent of galaxies at intermediate redshift, we propose that HCGs are appropriate for studying galaxy evolution at z similar to 1-2.