The Good, the Bad, and the Ugly: Texas' Amazing Insects
JavaScript is disabled for your browser. Some features of this site may not work without it.

The Good, the Bad, and the Ugly: Texas' Amazing Insects 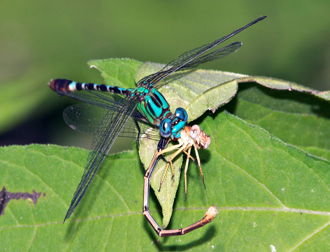 Nature's creativity and imagination is evident in an endless diversity among organisms. What better area is there to observe diversity than in the insects? The vast variety of shapes, anatomy, and colors exhibited by the group, challenges the imagination. Texas is home to over 30,000 insects, including around 6,000 species of beetles (Coleoptera) and 5,000 species of butterflies and moths (Lepidoptera). With only 5,000 species of mammals and 10,000 species of birds in the world, these are some pretty amazing numbers. Insects are the most diverse terrestrial animals on earth and form a natural and critical part of our environment. They are found in every terrestrial habitat conceivable and many freshwater habitats around the world. They occupy every functional feeding group from predators to herbivores and scavengers. Other insects are extremely important as pests of crops and livestock; they transmit diseases to man and animals; they pollinate crops, produce honey, lacquer and other useful substances. Insects are commonly used as laboratory animals and many are useful as environmental indicators. They are also some of the most beautiful creatures in their own right. This talk will serve as an introduction to this amazing group of animals that you can easily find as close as your backyard. It will focus on a few specific insects and related groups, including dragonflies and damselflies, dung beetles, fire ants, green lacewings (also known as aphidlions) and scorpions.