Beyond Our Solar System: The Search for Extrasolar Planetary Systems
JavaScript is disabled for your browser. Some features of this site may not work without it.

Beyond Our Solar System: The Search for Extrasolar Planetary Systems 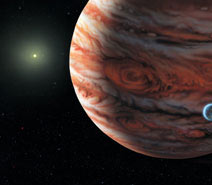 On October 11, Dr. William Cochran's team of astronomers with The University of Texas at Austin’s McDonald Observatory Planet Search project announced the discovery of the first planet orbiting a star in a close-in binary star system. This planet orbits the larger star of the binary system Gamma Cephei, about 45 light-years away in the constellation Cepheus. The McDonald Observatory Planet Search began in 1987. The team uses the 2.7-meter Harlan J. Smith Telescope to monitor about 180 nearby Sun-like stars for Jupiter-sized planets. In addition to Gamma Cephei, the team has found planets orbiting the stars 16 Cygni B and Epsilon Eridani. This lecture will discuss the methods used by Dr. Cochran’s team, as well as the formation and evolution of planetary systems.