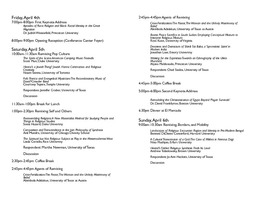 Religions mix. Scholars of religion have employed a variety of terms to describe the processes and results of religious mixing, including syncretism, hybridity, creolization, bricolage, transculturation, and blending. Although some of these terms are useful conceptual tools, at root they replicate problematic binaries or reduce religious mixing to contagion. Many of these terms have scurrilous histories of application, often to silence marginalized voices, impose unity, and fortify institutional power. The debate over terminology—even when used “neutrally”—detracts from the creation of more nuanced models of religious synthesis. A new approach is needed. In order to overcome this terminological impasse, we suggest adopting a placeholder term—such as ‘mixing’ or ‘synthesis’—for the dynamic process of religious interchange. We are interested in models of religious mixing that attend to diversity without replicating troublesome binaries. Pure forms—if they ever existed—are relegated to the mists of early pre-history. Religions are heterogeneous constellations of historically contingent components from the start. Such an approach can attend to the agency of individual religious authorities and practitioners, the power-laden discourses that belie and constitute the process of mixing, and the competition between these discourses.

Except where otherwise noted, this item's license is described as Attribution-NonCommercial-NoDerivs 3.0 United States