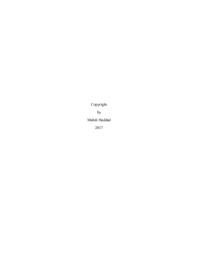 Shale formations have globally emerged as the sustainable hydrocarbon resources in the advent of the technologies for the economic production from these formations: horizontal drilling combined with multiple-stage hydraulic fracturing. The viable production from these resources requires a maximized stimulated reservoir volume encompassing a complex induced fracture network, which is highly dependent on the stimulation design. The optimization of the ultimate recovery requires integrated fracturing models with reservoir models in virtue of the limitations on the field data acquisition and their reliability, the high-cost of re-stimulation plans, and low-fidelity current reservoir simulation workflows. We proposed 2D and 3D hydraulic-fracturing models on the basis of the cohesive zone model (CZM) and extended finite element method (XFEM) with a combination of the following capabilities: (1) inclusion of fracture intersections via pore-pressure coupling; (2) fully-coupled poroelasticity in matrix, continuum-based leakoff, and slit flow in fracture(s) with the cohesive behavior for fracture growth. These models were validated in comparison with KGD solution, and were employed for the hydraulic-fracturing design and understanding microseismic event distributions. Moreover, the output of these models in a specific 2D case was integrated with a reservoir simulation workflow for the prediction of long-term production from the induced fracture network. Our 2D and 3D fracture-intersection cases demonstrate the significant role of the following parameters in the growth pattern of fractures upon intersection: (1) the length of the initially open segment of the natural fracture at the intersection; (2) the horizontal stress contrast; (3) the distance between the injection point and the intersection. Notably, hydraulic fracturing in higher depths with higher horizontal stress contrasts and closer injection points to the intersection causes more extensive natural-fracture opening and shear slippage. Also, we demonstrated the application of the proposed 3D fracture intersection model for further understanding of the anomalies observed in the Vaca Muerta Shale. This study revealed that the microseismic events at shallower depths, later times, and deviated from the expected planar distribution are mainly associated with shear slippage along weak interfaces due to the induced stresses by hydraulic fracturing. Thereby, our explicit modeling of fluid infiltration into the natural fracture(s) at the intersection leads to better understanding of the nature of microseismic events. Our multiple-stage, multiple-wellbore, hydraulic-fracturing model for naturally fractured reservoirs includes the operational and field components during the shale stimulations such as perforation tunnel length distribution, horizontal wellbores, stochastically-retrieved fully-cemented natural-fracture network, plugs for the stage stimulation (via connector elements), and external stimulation scenarios (controlled by programming the connector elements in an external user subroutine). The application of this model on synthetic cases shows the following: (1) sequential fracturing with limited number of clusters per stage leads to more control on the cluster stimulation in the presence of the non-uniform perforation tunnel length distribution and wellbore model; (2) proportional cluster efficiency with the perforation tunnel length (promoting the consistent perforation technology); (3) over-estimation of the cluster stimulation in the absence of the wellbore model and/or the natural-fracture network; and (4) more-viscous fracturing fluids conclude less complex induced fracture network (in agreement with the common field observations). The initial natural-fracture network in this model was retrieved from the proposed object-based method. Also, the transfer of the induced fracture network into an embedded discrete fracture model is featured by the higher fidelity in the estimation of long-term gas production from naturally fractured reservoirs. For the investigation of the effect of in-situ stresses on the reservoir engineering problems, we implemented the coupling of a geomechanics module with the UTCOMP reservoir simulator. We first validated this implementation via comparing the results with GPAS and CMG results at various cases. Our improvements in the geomechanics module (lowering the frequency of calling the geomechanics module and the order of the finite-element shape functions) significantly reduced the computational expenses while maintaining the solution accuracy. Overall, water flooding shows more sensitivity to the number of the reservoir-simulation time steps per geomechanics call than gas flooding cases (e.g., CO2 injection). Our reservoir simulation model for re-fracturing included various injection and production steps to show the effect of the re-fracturing fluid injection in a depleted formation on the ultimate recovery. This study showed the significant effect of the re-fracturing water injection in production via changing a single-phase to two-phase gas flow regime and deeper water invasion into the matrix due to the pressure depletion (after primary production)