Towards a Language of Yearning: Virginia Woolf’s Modernist Sublime 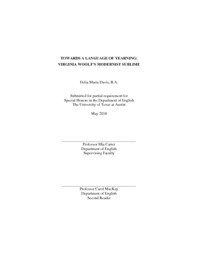 This thesis examines the intersection between Virginia Woolf’s contemporary materialist critique of imperial-patriarchal society and the more timeless existential inquiries that permeate her work. Analyzing two novels, The Voyage Out (1920) and Orlando: A Biography (1928), the project looks at the ways in which Woolf’s experimentations with genre develop her materialist critique while her modernist sublime aesthetic connects the political to existential questions. The thesis also argues for a thematic potentiality of Being that shapes Woolf’s unified political-artistic vision. It identifies two different types of yearning that characterize the stories of Woolf’s female protagonists: “identity-based yearning” and “universal existential yearning.” The former is a sort of longing to push beyond and rupture the constraints of hierarchical society, while the latter emphasizes expansion, growth and possibility. This thesis argues that Woolf’s modernist sublime aesthetic articulates the relationship between these two types of yearning. Her sublime can be found in a “symbology of landscapes” and a “semiotics of sensuality,” and these in some ways are borrowed from the Romantic aesthetic of the sublime, which is predicated on nature and the feelings of “astonishment” and existential terror that nature can give rise to. The longing and potentiality that the project traces in Woolf’s fiction also appears in her most radical pacifist-feminist essay, Three Guineas (1938). This project argues that Woolf’s essay makes use of the same formal experimentations in its materialist critique, which articulates how patriarchy works on an institutional level to perpetuate oppression. At the end of Three Guineas, Woolf proposes that women and other marginalized groups band together to form an Outsiders’ Society that will work in their own ways to achieve peace and social unity. The idea of Woolf’s Outsiders’ Society not only carries the same spirit of potentiality that unifies her political-artistic vision, but also offers a glimpse of a new horizon, a different possibility that could form the vocabulary for a new kind of progressivism.