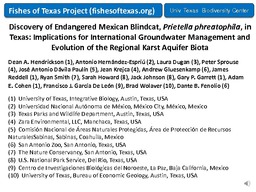 Mexican blindcat, Prietella phreatophila, described in 1954 from a cave system near the town of Múzquiz in central Coahuila state, and considered a Mexican endemic, was listed by the U.S. Fish and Wildlife Service as a foreign endangered species (protected "wherever found") in 1970. Explorations in the 1990s discovered many new localities extending nearly to the international border, and in 2016 the species was discovered in Amistad National Recreation Area (ANRA) in Texas, just north of the international border near Del Rio. Not only does the discovery support the aquifer of this fish being an internationally shared resource, but the stygobitic invertebrate biota found with the fish indicates a potentially large extent of the aquifer, and thus possibly the fish, in Texas. Invertebrate faunal connections (historic or current) extend from the Amistad Lake area of the new occurrence west into the Trans-Pecos region and east into the Edwards Aquifer of central Texas. We explore implications of this for both water management and evolutionary history of this and other blind ictalurids, and suggest that population genetic studies of both stygobitic fishes and invertebrates could help hydrogeologists better define often difficult to map aquifer extents and interconnections. While NPS is continuing to support the cave explorations of ANRA that produced the Texas discovery, we propose a broader bi-national sampling effort for both the fish and invertebrates extending well beyond the current known distribution of P. phreatophila. We also pointed out questions about phylogenetic relatedness of P. phreatophila and P. lundbergi further south, as well as the possibility of a monophyletic clade of blindcats, including those of the Edwards Aquifer, Satan and Trogloglanis. If substantiated, that evolutionary history would imply broader historic inter-aquifer connections ranging from the San Antonio area as far south as southernmost Tamaulipas. Finally, we report establishment of a small captive population of Prietella phreatophila at San Antonio Zoo for research and possibly eventual conservation applications.

Paper presented July 15, 2017 at the annual Joint Meeting of Ichthyologists and Herpetologists in Austin, Texas, USA (http://conferences.k-state.edu/JMIH-Austin-2017/). The oral presentation of this content mentioned questions about the taxonomy and phylogenetic position of Prietella lundbergi and the only specimens attributed to P. lundbergi apart from the holotype. Since the presentation, we obtained high resolution CT scans of both the holotype and a specimen (TNHC 25767) from Cueva del Nacimiento del Río Frio, not far north of the type locality. The anatomy revealed in those CT scans suggests that these specimens represent a single species, and that P. lundbergi is only remotely related to Prietella phreatophila, which would be consistent with results of Wilcox, T.P., F.J. Garcı́a de León, Dean A. Hendrickson, and D.M. Hillis. 2004. “Convergence among Cave Catfishes: Long-Branch Attraction and a Bayesian Relative Rates Test.” Molecular Phylogenetics and Evolution 31 (3): 1101–13. doi:10.1016/j.ympev.2003.11.006). Thus, further research is in progress by Hendrickson, Lundberg, Luckenbill and Arce that may result in taxonomic revision removing P. lundbergi from Prietella.

Except where otherwise noted, this item's license is described as Attribution-NonCommercial-NoDerivs 3.0 United States