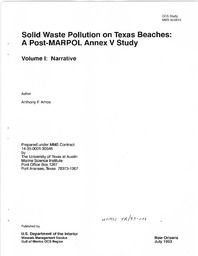 Project MMS-Beach was designed to test the effectiveness of MARPOL Annex V in reducing the quantity of man-made debris littering Gulf of Mexico barrier island gulf beaches, specifically those in Texas. Annex V of the International Convention for the Prevention of Pollution from Ships, 1973 (MARPOL) became international law on 31 December 1988. The Annex prohibits the discharge of plastics into the ocean and limits the discharge of other solid waste pollutants within varying distances from the U.S. coastline. The U.S. Minerals Management Service (MMS) needs to know if users of the Gulf of Mexico are observing Annex V. If so, then this should manifest itself in a reduction in the quantity of certain types of litter found on Gulf beaches. These materials include those readily identifiable with various operations of interest to MMS, for example, items from the off shore oil and gas exploration and production industry. The objective of this study was to compare results of beach-debris surveys done two years after, with those done two years prior to Annex V entering into force. The methods of surveying the beach had been devised by the author and were to be repeated in the post-MARPOL Annex V period. The investigator started looking at litter on Mustang Island (Texas) gulf beach (Figure 1.1) in 1978 when a survey was initiated to monitor the bird population with the advent of beachfront development. At first the references to litter and debris were anecdotal, in the form of notes and sporadic measurements. In 1983 an attempt was made to estimate the quantities of both man-made and natural debris using some 40 categories of debris types. Estimates were based on the investigator's knowledge of the common items after five years and over 500 observations to that date. An index system was devised based on a 0 to 5 scale of magnitude. This method is still employed on the survey (now with 2,100 observations) and is useful in gauging the seasonality of materials washing up on the beach, especially in some categories. This method does not yield quantitative data (although curves have been fitted to some common items after numbers were counted independently and graphed against the estimates). The counts were started in 1987 with some financial assistance from the Texas A&M University Sea Grant Program. In addition to the beach-bird surveys (BEACHobs), special garbage surveys (GARBGobs) covering the same 11.8-km stretch of beach were done at an eight-day interval. Items large enough to be seen from a slowly moving vehicle are counted; about a hundred categories of litter and debris are logged. It was on the basis of this study, done in 1987 and 1988 before the enactment of MARPOL Annex V (in force 1 January 1989), that the investigator proposed to MMS to repeat this survey some two years after MARPOL Annex V. This report contrasts the 'before' and 'after' data to see if there is any indication that MARPOL has affected the littering of Texas beaches. A direct link between Annex V and changes in litter on beaches cannot be forged. However, looking at the nature of the debris items before and after MARPOL may give clues to its successful implementation and adherence to by seagoing vessels. This survey is referred to as the 'Weekly Counts'. About 200 such counts were made, 175 of which are used in this report (the others were special counts done in conjunction with National Cleanups and other events). To examine smaller items, another survey called 'Weekly Collections' was made in 1987-88 and repeated in 1991-1992. All debris and litter items were collected from three sites in the same beach area at the same time that the counts were done. Sites were 10-m wide and stretched from the shoreline to the high-tide line. This study was designed to quantify the smaller litter items and the 'uncountable' natural debris items such as seaweed and tar. After 1988 the arduous GARBGobs counts were continued sporadically through 1990. So as not to lose the continuity of data gathering, selected easily counted items were added to the BEACHobs bird counts and done on a bi-daily schedule. These are called the 'Count of Five' for the five targeted items. Finally, to identify sources of marine debris in detail, we made monthly collections of all containers on San Jose Island to the north of Mustang Island. San Jose Island is inaccessible except by boat and there is no cleaning of its gulf beach.
Prepared under MMS contract 14-35-0001-30546 by The University of Texas at Austin, Marine Science Institute
July 1993