The Age of Dinosaurs?
JavaScript is disabled for your browser. Some features of this site may not work without it.

The Age of Dinosaurs? 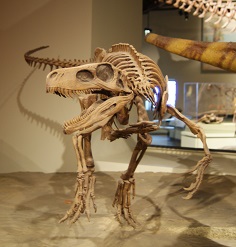 If you asked this question a generation ago, you would have learned that about 65 million years ago climatic change probably affected the sluggish, mal-adapted dinosaurs and gradually carried them off to extinction. Then, in the 1970s, the theory of plate tectonics suggested that a great episode of volcanic activity led to a severe environmental decline and catastrophic die-off of the dinosaurs and many other species. More recently, a spectacular new hypothesis claims that an asteroid impact wiped out the dinosaurs in one of the most cataclysmic extinctions in Earth history. What is the evidence for each of these explanations, and how do paleontologists view them today? We will have a look at the evidence and the possible causes for dinosaur extinction. We will also look for an answer to an even more surprising question – Did all dinosaurs really go extinct? Some paleontologists contend that birds are the living descendants of ancient dinosaurs. If true, does this mean that dinosaurs are still alive?