Origins of the Universe
JavaScript is disabled for your browser. Some features of this site may not work without it.

Origins of the Universe 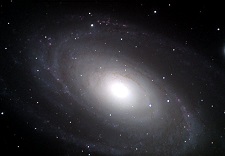 There have been many ideas and speculation about the age and origin of the Universe. There are four major discoveries that have led us to believe that the universe started in a giant explosion about 13 billion years ago. These include the fact that the sky is dark at night, that galaxies expand away from us, that if we look far enough we can see the birth, and that the amount of helium is consistent with this explosion picture. These four discoveries are described and discussed.