The Amazing Mission to Pluto: Three Billion Miles Away and We Made It!
JavaScript is disabled for your browser. Some features of this site may not work without it.

The Amazing Mission to Pluto: Three Billion Miles Away and We Made It! 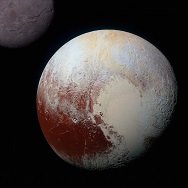 More than three billion miles away and ten years in the making, the New Horizons Mission to Pluto brings invaluable information from the outer reaches of our solar system. New Horizons is the fastest aircraft ever launched and the first mission to provide information about the atmospheres, geology and surface properties of Pluto and its surrounding moons, including Charon and Hydra. Dr. Alan Stern, principal investigator for the mission, shares the history of the mission, the science behind it as well as its major scientific discoveries.