A benthos and plankton study of the Corpus Christi, Copano and Aransas Bay systems. II, Report on data collected during the period July, 1973-April, 1974 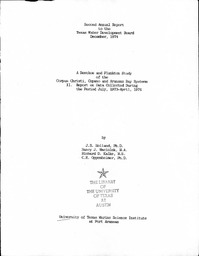 This second annual report to the Texas Water Development Board includes data collected from July, 1973 to April, 1974 by the University of Texas Marine Science Institute at Port Aransas, Texas. It includes hydrographic, zooplanktonic, phytoplanktonic and benthic data collected at thirty sites in the Corpus Christi Bay complex (Figures 1 and 2). These sites are described in our first annual report (Holland, et al., 1973a). The basic aim for this year's research was to maintain the sampling program and to simultaneously begin the analysis of data from the first nineteen months of collections (October, 1972 - April, 1974). A great deal of effort has gone into the computer techniques needed to implement the various methods for data analysis. Several different data analysis techniques have been explored; these will be reviewed in the appropriate section. In this report, we wish to present data collected during the second ten months of the study period, discuss various analytical techniques and present preliminary discussions of observations made during the first two years of this study. Information found in the first annual report will not be repeated except for the species lists and bibliographies, which have been updated. Data collected during the period covered by this report, has, as was the first year's data, been stored in the TWDB'S Coastal Data System (CDC), a computer operative storage and retrieval system. The system operates on a Univac 1106 computer system which is located at the TWDB in Austin, Texas.
December, 1974