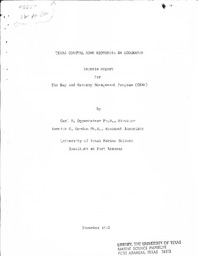 November 1972
Because esthetics, biological environment and physiography are so interrelated and have changeable meanings in various environments, we are obligated to think of the environment in terms of biological change, as environmental protection is presently a basis for much dialogue and sometimes controversy. To do this we have chosen an old concept and adapted it to identify the relationships among biological communities that may be changed when man or nature modifies the coastal environment. The chosen term is BIOTOPE, which is defined in Webster's as a region uniform in environmental conditions and in populations of animals and plants for which it is the habitat. Although the biological environment may appear to the layman as either diverse or uniform and without pattern, there are recognizable biotic assemblages that have some degree of relationship in their composition. Such recognizable assemblages may cover wide areas, such as the extensive turtle grass flats, or may be discrete small units, such as an oyster reef. Thus we have adapted the term BIOTOPE to identify such assemblages and initially suggest the following eighteen examples listed in Table 1. Thirteen of them plus an overview are illustrated. ... If the concept of the BIOTOPE is to be used to describe common, recognizable Texas Gulf coast communities, then we can use these descriptions to demonstrate the results of changes. For example, if one plans to dredge a grass flat to produce a spoil bank and a channel, the Biotopes of these three areas can be compared to allow the decision maker to evaluate how the change may affect the area involved. Because the decision maker is not always scientifically oriented, we have elected to describe the Biotope by artists' renditions accompanied with lists of common and scientific names of major species of plants and animals and a description of the relative productivity of the major organisms in the area.