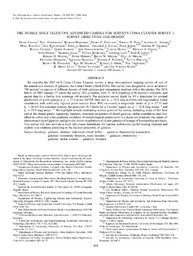 We describe the HST ACS Coma Cluster Treasury survey, a deep two-passband imaging survey of one of the nearest rich clusters of galaxies, the Coma Cluster (Abell 1656). The survey was designed to cover an area of 740 arcmin(2) in regions of different density of both galaxies and intergalactic medium within the cluster. The ACS failure of 2007 January 27 leaves the survey 28% complete, with 21 ACS pointings (230 arcmin(2)) complete, and partial data for a further four pointings (44 arcmin(2)). The predicted survey depth for 10 sigma detections for optimal photometry of point sources is g' = 27.6 in the F475W filter and I-C = 26.8 mag in F814 (AB magnitudes). Initial simulations with artificially injected point sources show 90% recovered at magnitude limits of g' = 27.55 and I-C = 26.65. For extended sources, the predicted 10 sigma limits for a 1 arcsec(2) region are g' = 25.8 mag arcsec(-2) and I-C = 25.0 mag arcsec(-2). We highlight several motivating science goals of the survey, including study of the faint end of the cluster galaxy luminosity function, structural parameters of dwarf galaxies, stellar populations and their effect on colors and color gradients, evolution of morphological components in a dense environment, the nature of ultracompact dwarf galaxies, and globular cluster populations of cluster galaxies of a range of luminosities and types. This survey will also provide a local rich cluster benchmark for various well-known global scaling relations and explore new relations pertaining to the nuclear properties of galaxies.