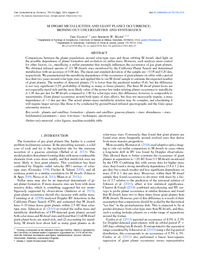 Comparisons between the planet populations around solar-type stars and those orbiting M dwarfs shed light on the possible dependence of planet formation and evolution on stellar mass. However, such analyses must control for other factors, i.e., metallicity, a stellar parameter that strongly influences the occurrence of gas giant planets. We obtained infrared spectra of 121 M dwarfs stars monitored by the California Planet Search and determined metallicities with an accuracy of 0.08 dex. The mean and standard deviation of the sample are -0.05 and 0.20 dex, respectively. We parameterized the metallicity dependence of the occurrence of giant planets on orbits with a period less than two years around solar-type stars and applied this to our M dwarf sample to estimate the expected number of giant planets. The number of detected planets (3) is lower than the predicted number (6.4), but the difference is not very significant (12% probability of finding as many or fewer planets). The three M dwarf planet hosts are not especially metal rich and the most likely value of the power-law index relating planet occurrence to metallicity is 1.06 dex per dex for M dwarfs compared to 1.80 for solar-type stars; this difference, however, is comparable to uncertainties. Giant planet occurrence around both types of stars allows, but does not necessarily require, a mass dependence of similar to 1 dex per dex. The actual planet-mass-metallicity relation may be complex, and elucidating it will require larger surveys like those to be conducted by ground-based infrared spectrographs and the Gaia space astrometry mission.