Resolving The Optical Emission Lines Of Ly Alpha Blob "B1" At Z=2.38: Another Hidden Quasar 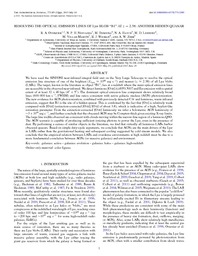 We have used the SINFONI near-infrared integral field unit on the Very Large Telescope to resolve the optical emission line structure of one of the brightest (L-Ly alpha approximate to 10(44) erg s(-1)) and nearest (z approximate to 2.38) of all Ly alpha blobs (LABs). The target, known in the literature as object "B1", lies at a redshift where the main optical emission lines are accessible in the observed near-infrared. We detect luminous [OIII]lambda lambda 4959,5007 and H alpha emission with a spatial extent of at least 32 x 40 kpc (4 '' x 5 ''). The dominant optical emission line component shows relatively broad lines (600-800 km s(-1), FWHM) and line ratios consistent with active galactic nucleus (AGN) photoionization. The new evidence for AGN photoionization, combined with previously detected CIV and luminous, warm infrared emission, suggest that B1 is the site of a hidden quasar. This is confirmed by the fact that [OII] is relatively weak compared with [OIII] (extinction-corrected [OIII]/[OII] of about 3.8), which is indicative of a high, Seyfert-like ionization parameter. From the extinction-corrected [OIII] luminosity we infer a bolometric AGN luminosity of similar to 3x10(46) erg s(-1), and further conclude that the obscured AGN may be Compton-thick given existing X-ray limits. The large line widths observed are consistent with clouds moving within the narrow-line region of a luminous QSO. The AGN scenario is capable of producing sufficient ionizing photons to power the Ly alpha, even in the presence of dust. By performing a census of similar objects in the literature, we find that virtually all luminous LABs harbor obscured quasars. Based on simple duty-cycle arguments, we conclude that AGNs are the main drivers of the Ly alpha in LABs rather than the gravitational heating and subsequent cooling suggested by cold stream models. We also conclude that the empirical relation between LABs and overdense environments at high redshift must be due to a more fundamental correlation between AGNs (or massive galaxies) and environment.