Conversation with an Apple : play development as movement-building against mass incarceration 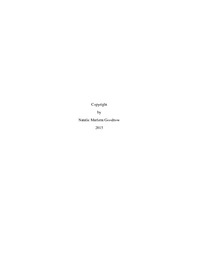 This reflective practitioner research project explores if and how viewing and responding to drafts of my original solo play in development, "Conversation with an Apple," contributes to efforts to build a movement against mass incarceration, with a particular focus on dismantling the school-to-prison pipeline. I draw upon Michelle Alexander's theorization of mass incarceration in the United States, social movement theory elaborated and archived by contemporary activists, and theories in performance and affect studies to contextualize my investigation. I describe how I utilized Liz Lerman's Critical Response Process to elicit audience responses to staged readings of "Conversation with an Apple," and also how I employed modified grounded theory techniques to analyze those responses. I then explain how insights gained through these methodologies informed revisions of the "Conversation with an Apple" script and my plans for future post-show workshops. I conclude with an evaluation of the usefulness of these play development and research methodologies in my artistic practice. I find that both Liz Lerman's Critical Response Process and the modified grounded theory analysis I utilized, along with a return to my guiding theoretical frameworks, contributed meaningfully to my reflective practice, yielding several key insights. First, I discovered that the play does seem to have the potential to raise consciousness among audience members regarding multiple manifestations of mass incarceration as it affects young people, although I decided that a few key mechanisms of mass incarceration might be more fully elaborated through script revisions. Second, I found that when audiences responded to the play, the shared experience of viewing the performance functioned as a springboard for conversation about other shared experiences in their lives, thus building a sense of community in at least a small way. I also theorize that the act of transmitting heightened affect together while viewing this play built community. Finally, my analyses revealed that although some audience members felt outraged at the realities of mass incarceration and inspired to make a change, many felt hopeless after viewing the play. These analyses informed my most significant revisions to the "Conversation with an Apple" script and plans for post-show workshops.