Geographic Variations in Survival of Hybrids Between Etheostomatine Fishes 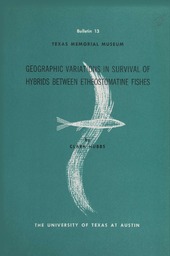 Comparative analyses of more than 500,000 darter eggs variously tested for fertility and viability from 1954 to 1965, and gathered from widely separated geographic locations, showed that darter hybrids were as viable as or more viable than the controls. Both reciprocals of 70 hybrid combinations were reared and more than 60 additional combinations had one reciprocal reared. Eggs were able to inhibit the activity of heterospecific sperm, especially after it had expended about one half its normal activity period; an inhibition obviously designed to reduce the effect of chance meeting of gametes in the water. Several patterns of differential survival were noted, all associated with decreased hybridization potential in sympatry. Included were the first example of postmating reinforcement of isolation mechanisms, and an example of reinforcement being masked by more significant behavioral isolation. Several hybrid combinations had more viable hybrids in one reciprocal than in the other, always occurring where one parent had a high laboratory survival and the other was difficult to rear. All examples were maternally influenced. Relative fecundity studies show that the darters in areas with many species have more and smaller eggs than equal sized females in the peripheral areas where few darter species occur.