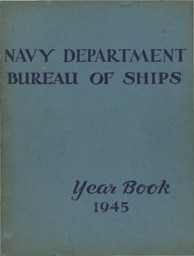 The PDF of this yearbook is searchable. To find a picture of a specific person, open the PDF, press CTRL F, and then search for the person's name.
Six years have passed since that summer's day in June, 1940, when the Congress of the United States officially created the Navy's Bureau of Ships--six of the most fabulous, the most significant, the most incredible years, perhaps, in the history of the world. Six years ago, the United States hoped to be able to stay out of War. Even with the Fall of France, the evacuation from Dunkirk, and the devastating air blitz on England, the people of America continued to remain at peace, secured by two . mighty ocean ramparts. Five years later-by 1945-these same people of America had built military and naval forces bewildering in array, crushing in power, and mobile beyond the limits of earlier imagination. With an organization that came into being in June, 1940, a fleet of 104,000 vessels and craft was produced. A Navy that cast its weight over five oceans. was brought into being during those five years at a cost of more than $30,000,000,000 involving the efforts of 1,000,000 workers and close to 6,000 Bureau of Ships personnel. Had anyone predicted the vast scope of this accomplishment back in 1940, he would have been considered insane. Today the achievement is still almost unbelievable to those who played major roles in the spectacular drama of American shipbuilding through five years of war. This yearbook represents a pictoral record of part of the story of those years in term$ of the great behind-the-lines battle for production that went on day after day and night after night in the Bureau of Ships, home office of the Navy's marine architects and engineers, production men and technicians, researchers and radio specialists. The story of the Bureau is the story of the drawing together into one extraordinary production team shipbuilders and industrialists, scientists and statisticians, administrators and artisans to the end that America would have a Navy to strike fear in the hearts of any possible combination of enemies. This epic of unparalleled naval expansion will long live in the minds of the American people as a tribute to the nation's capacity for production and cooperation. Never before has a nation so graphically demonstrated its ability to put its heart and soul into the forging of weapons for its own protection and for the establishment of order throughout the whole world. We commend to you this story, to be kept in the background of your mind as you look at these pictures, of people, of activities, and of the fleet.