Telescopes as Time Machines: The Legacy of Hubble & the Future through the James Webb Space Telescope
JavaScript is disabled for your browser. Some features of this site may not work without it.

Telescopes as Time Machines: The Legacy of Hubble & the Future through the James Webb Space Telescope 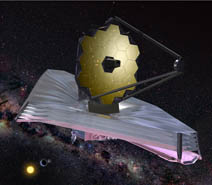 A 2013 SPECIAL EDITION LECTURE: The Hubble space telescope delivered unprecedented scientific discoveries about our universe's past and its very creation, as well as breathtaking images of spiral galaxies. Now, astronomers are preparing for bold explorations through an $8 billion machine that is over four times as large as Hubble and possesses technological capabilities that are 100 times more powerful: the James Webb Space Telescope. Dr. Jason Kalirai is the Deputy Project Scientist for this revolutionary instrument. He will provide an overview of the stunning discoveries that the Hubble telescope yielded, and outline how the James Webb telescope will build on those discoveries by peering deeper than ever into our universe's past to help us better understand how stars and planets formed. The James Webb Telescope will also help answer some of the most important questions humanity has ever asked, including whether life exists outside planet earth. This "time machine" will undoubtedly revolutionize our understanding of the universe, and re-write textbooks on astronomy. Co-sponsored by the UT Astronomy Department.