Icy Mysteries of Mars Revealed
JavaScript is disabled for your browser. Some features of this site may not work without it. 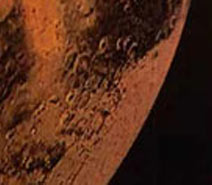 Dr. Holt and his scientific colleagues have discovered enormous reserves of frozen water on Mars. Using radar from an orbiting satellite they have found glaciers up to half a mile thick in the Martian mid-latitudes where no current glacier should exist. These bodies of ice are apparently relicts of Mars' ancient climate and have survived by being buried by a thin layer of rock debris. These glaciers may be remnants of an ice sheet that covered the mid-latitudes during a past ice age, when the planet may have been tipped so that its poles faced the sun and the mid-latitudes were much colder. These supplies of frozen water could be key to eventual human exploration of the red planet, as they could provide both the water and solar energy needed to make oxygen for breathing and hydrogen for fuel.