Dinosaurs in the Digital Age: Facts, Fictions, and Forgeries
JavaScript is disabled for your browser. Some features of this site may not work without it.

Dinosaurs in the Digital Age: Facts, Fictions, and Forgeries 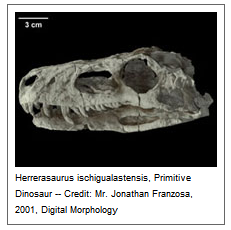 The science of paleontology is 300 years old, and even today it fundamentally relies on the discovery of new fossils. The last decade has seen an unprecedented burst of discovery that includes feathered dinosaurs and mammals that eat dinosaurs. Equally important to paleontology has been an unprecedented blossoming of digital technologies that allow us to understand the new fossils in ways never before possible, and to squeeze even more information from the fossils that were collected decades or centuries ago. -- Chief among these is the CT scanner, which allows paleontologists to non-destructively explore the insides of fossils, and the Internet, which makes this new information available to the world. CT scanning has been especially important in giving us an idea about the brains and minds of dinosaurs, and their living avian descendents. The new discoveries are only strengthening our understanding of the dinosaurian nature of living birds. And the new technologies are also strengthening perceptions of some of the darker sides of human nature, by showing fraud and forgery among some of the new discoveries. This lecture shares the new dinosaur discoveries and new tools, and shows how the field of forensics has found a place in paleontology.