CSI-Texas: The Science of Sleuthing
JavaScript is disabled for your browser. Some features of this site may not work without it.

CSI-Texas: The Science of Sleuthing 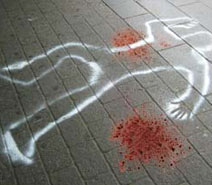 The scientific collection and evaluation of evidence has taken on an increasingly important role in apprehending and convicting criminals. We’ve seen the television version of these efforts on shows like CSI, but what goes on in a real crime laboratory? William Ginn, Manager of the Department of Public Safety’s Crime Lab in Austin, gives us a view of the scientific procedures used to protect the innocent and capture and convict the guilty. Because the results will be used in court, all of the potential evidence is carefully catalogued and accounted for during every step of each analysis. The crime laboratory that Mr. Ginn supervises deals with finding hidden fingerprints, collecting and matching DNA, using special photographic techniques to reveal evidence, matching bullets and cartridges to firearms, detecting forgeries, analyzing trace evidence like hair and fibers, and identifying drugs and other toxic substances. Mr. Ginn will discuss how four major crimes you may have seen in the news were solved with the help of his laboratory.