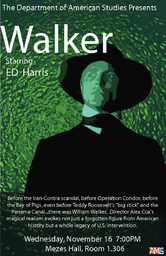 Poster for the November 16, 2011 screening of the 1987 film Walker as part of the 2011-2012 "The 'Other' Americans" film series.
Event description from AMS Events: We are happy to announce the re-start of the American Studies Film Series for the 2011-2012 school year. This year our theme is "The 'Other' Americans." We'll be looking at a wide variety of films dealing with the interactions between the U.S. and the people and nations of the rest of the Western Hemisphere. We've got island paradises and private armies, drug smugglers and cartoon llamas.