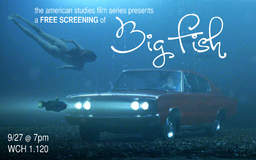 Poster for the September 27, 2012 screening of the 2003 film Big Fish as part of the fall 2012 "American Dream" film series.
Event description from AMS Events: This Thursday, September 27th, the American Studies Film Series will be presenting its first free screening of the year! This year, we've incorporated the departmental theme of the American Dream in programming the series, and thus we'll be starting off with Tim Burton's 2003 film Big Fish. Starring Ewan McGregor, Albert Finney, Billy Crudup, and Jessica Lange, Big Fish operates as a wonderful example of a fantastical and myth-filled version of the American Dream.