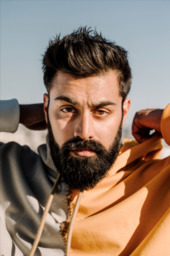 This interview is with Saagar Shaikh, an actor living in Los Angeles, CA. Saagar talks about growing up as a Pakistani Muslim in Alief and San Antonio and describes the differences between those communities during his childhood. He describes his career path, including his decision to become an actor and the ups and downs of finding his place in the industry. Saagar goes on to talk about his recent role as Aamir Khan in Disney’s Ms. Marvel series. He shares about a day in the life, favorite scenes and memories, and what the role means to him.

Except where otherwise noted, this item's license is described as Attribution-Non Commercial 3.0 United States