The Unintended Portraits of the Meninas de Sinhá (Black Brazilian Women Elder Activists)
JavaScript is disabled for your browser. Some features of this site may not work without it. 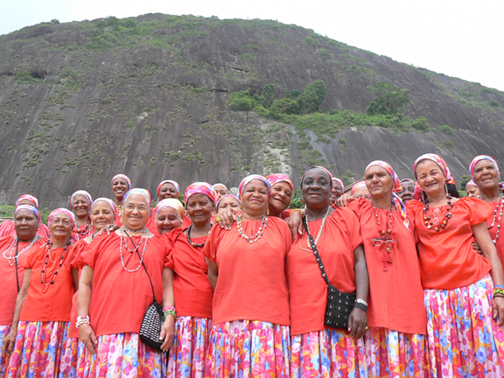 The Unintended Portraits of the Meninas de Sinhá
by Celeste Henery

Learning to take care of themselves is the on-going practice of this singing group of aging black Brazilian women, the Meninas de Sinhá (the girls of the Sinhá). Isabel’s poetry recounts the group’s refrain of encouragement to each member to rediscover the joy in their complicated lives. These portraits bring together rarely rendered images of older black Brazilian women and testify to the women’s resiliency and how their suffering has transformed into grace.

The group was created in the late 1980s by Valdete, a community leader and activist in the city of Belo Horizonte. She observed older women in her peripheral neighborhood of Alto Vera Cruz leaving the local clinic with large quantities of anti-anxiety medication. Believing that pharmaceuticals were not a solution, Valdete brought the women together to understand their anxieties. Hearing familiar stories of emotional and physical struggle from this older generation of women, she formed this community of support to improve these women’s mental wellbeing by expressing their emotions through song.

Raised in the rural interior of the state of Minas Gerais, these women began working early, first as children on coffee plantations and farms, and then in the city, mostly as domestic laborers. Living in underserved neighborhoods, they raised large families, lost husbands to illness, children to violence and accidents, and slowly, parts of themselves, as they dedicated their lives to the care-taking of others. Economic hardship and various forms of discrimination mark these women and have been a source of their minor and major depression(s). As economically poor women of color, their experiences of racism, sexism, and classism have challenged their sense of desirability and worth, while negative perceptions of mental illness and their aging bodies also have been sources of social exclusion. Over the years, they have collectively created an environment in which they focus on their own wellbeing, reinforcing their emotional autonomy and social value.

These images are part of a larger visual archive of these women’s group life that I photographed while conducting academic fieldwork in Brazil (2005-2007). The photography began as my own aesthetic and artistic venture to document aging black people, but rapidly transformed into a collection narrating our time together as well as providing the women with images of themselves. While they were frequently photographed at performances, few of the women had photographs of themselves and only a small number had cameras. Following the women’s expressed desires for pictures, I began carrying my camera to their rehearsals and performances, photographing their movements and moods as they went about their everyday lives in the group. Initially, many of the women were bashful, reticent, and a few were captivated. Eventually, a handful confidently presented themselves to the camera. From this tentative space of documenting, the unintended portraits were shot. I sought to reveal the women’s integrity, transformation, and the expanded understandings of blackness they represent. These aspects of Brazilian life are often overshadowed by images of poverty, hyper-sexuality, violence and festivity that do not speak to how social struggle is lived and waged in that country.

These photographs and the larger archive are glimpses into a grassroots effort to improve the quality of life of black women, mostly in their 60s and 70s, who sing their stories in schools, hospitals, prisons, and at artistic events throughout their country. Teaching through example that aging people have much to share with society, they have transformed their life trials into a form of social work. In return, the group experience gives them a renewed sense of purpose, fulfillment and appreciation in these contemplative and waning years of their lives.

Each photograph is also accompanied with an audio file and transcripts of each member’s response to the question Valdete suggested be asked: “What is the group for you?

1Sinhá is a colloquial version of the word “Senhora” or Misses, referring to the slave owner’s, or master’s wife. Playing on this meaning, the group transformed “Girls of the Sinhá,” to mean that the women are the owners of their own lives.